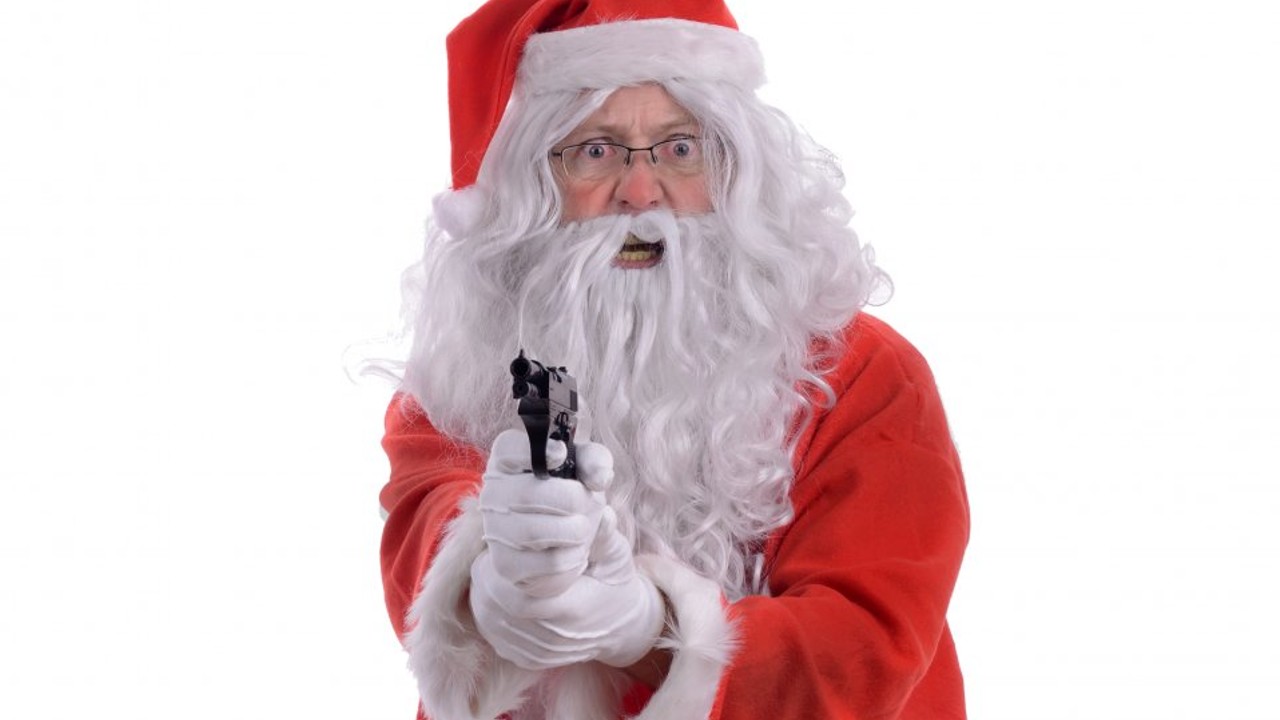 8 Brave Soldiers That Died Heroically in the War on Christmas

Here at ManFacts, we believe strongly in honoring our veterans. We saluted the veterans of WWII by playing the Nazi Zombie Map on Call of Duty for one week straight. We paid respect to the Vietnam veterans by going to a pho restaurant and making a huge scene when they asked for proof of vaccination. We even showed our support for the Iraq war Veterans by buying a bulk amount of surplus black market weapons from the Iraq War. Now we pay our tribute to the Veterans of America’s most important war by honoring those who fought bravely and died heroically in the War on Christmas.

The Man Who Hung Himself Trying To Put Up Christmas Lights

John Dulaney was doing his favorite Christmas activity: reenacting scenes from popular Gen X Christmas movies. After his wife told him no, he can’t booby trap the house in case robbers come over, he decided to go with a bonafide classic scene, Clark Griswold hanging the Christmas lights.

“They’re almost up,” he yelled while his family looked on in fear. “Maybe you should wait until there’s more light and there’s less ice on the roof,” John’s wife yelled. “EAT MY RUBBER,” John replied.

Before anyone could point out that “Eat my rubber” wasn’t yelled at the lights scene and didn’t really apply here, John slipped on a patch of ice and tumbled down the roof. John tried futile to grab onto the lights but only succeeded in entangling them around his neck.

As John swung back and forth, his family stood in solemn silence with the knowledge that they would become a grisly statistic – a casualty in the war on Christmas.

The Man Who Sacrificed His Life To Keep The Fire Going

Bill Baxter was a man who loved three things, his God, his country, and Christmas time with his family who he hates the rest of the year. It was this seasonal love that allowed him to become a hero one fateful night when his family’s fireplace was about to extinguish itself.

When a great and terrible blizzard made a trip to Home Depot impossible, Bill needed to act quickly. He stuffed his sweater with kindling and prepared himself. After saying his heartfelt goodbyes to his wife, two children, and his gingerbread trailer park house, he leaped into the fireplace and allowed the remaining cinders to consume him.

Though his screaming was terrible, it was filled with the sounds of Christmas cheer. His living room stayed filled with the warmth of good deeds, and the aroma of pumpkin spice with a hint of burnt flesh. We salute you, Bill Baxter.

The Man Who Had A Holiday Heart Attack At Walmart

Tom Watkins, father of three, was at Walmart buying toy guns, the kind that REALLY looks like actual guns, for his sons. Just when he had made his way to the hyper-realistic toy gun isle (everybody’s favorite isle), he was ambushed by a “woke” Walmart employee who malevolently spouted the age-old satanic chant, “Happy Holidays,” so loud her mask nearly fell off her face.

Being the true Christian patriot that he is, Tom was unable to even process this dreadful string of words. The shock of such a blasphemous phrase was so intense that he had a heart attack, causing him to fall off his scooter, and drop dead right in the middle of that Walmart.

The Man Who Choked On a Croissant At Starbucks

“Where the FUCK are the reindeer,” Fred screamed at the Starbucks employees. “It’s MERRY CHRISTMAS, YOU LAZY ENTITLED MILLENIALS.” John glared at the 14-year-old barista as she tried to avoid contact by pretending to text on her phone.

Fred grabbed his coffee and started pacing frantically. “Next thing you tell me there’s gonna be no pumpkins at Halloween or that Cupid is going to be circumcised this year. What about RABBITS?! ARE YOU GONNA BAN RABBITS THIS EASTER TOO?!”

Fred began guzzling his coffee, and then took a bite of his nine-dollar croissant. “And another thing, how come there’s never any coffee-flavored coffe-”

Fred stopped and looked around frantically. A bit of croissant caught in his throat. He tried to cough it out but to no avail. He looked around hoping someone would help him, but everyone was too busy avoiding eye contact. As he died, his last words were “You know who else was murdered around Christmas?! I’ll give you a hint, it rhymes with Brezsus NICE,” before collapsing on the floor.

Thus, Fred became another casualty on the front lines of the yuletide war.

The Man Who Drowned Trying To Teach Aquatic Life About Christmas

David had many dreams throughout his life. He had spent several years trying to teach sharks how to enjoy a McDonald’s Fish Filet sandwich, when this failed he tried to teach them how to consume large quantities of plastic. But no matter what he did, the government simply laughed in his face and slapped him with fines for polluting.

The average man would have stopped dumping things into the ocean, but David knew the ocean desperately needed him. Finally, one night on Christmas Eve while he was consumed by the demons inside his whiskey bottle, he started up his boat and headed out into the middle of the ocean with a year’s supply of old Christmas decorations. If the ocean could not be taught how to recycle plastic or how to enjoy delicious fried fish, maybe it could be taught the meaning of Christmas. Fate would have other plans for David.

An investigation found that David had slipped from his boat and into the cold peerless ocean, long before even a single decoration had been thrown into the waters below. While the creatures of the ocean may still be blind to the ways of Christmas, it was not for a lack of effort. Rest easy David, Christmas thanks you.

Look into your closet, what do you see? A collection of fabrics, some worn and some new and maybe one that you wear when Christmas time is near. Is there a greater joy than wearing a Christmas sweater for all to see and admire?

A Christmas sweater is more than just a piece of clothing. It’s a show of force that tells people you aren’t afraid to love Christmas.

Greg Chiposki felt this way, he felt it deep within his heart and even deeper in his soul. During a holiday party, he proudly adorned himself in the sweater his grandmother had sewn for him. Wearing it amongst his coworkers, he knew he was fighting the good fight. It was then that his skin began to itch, the rough fabrics of the sweater ravaging his body and turning his epidermis into a hellscape.

Greg scratched at himself like a wildcat, feeling the pain in each nail stroke, but he held on for Santa Claus and for Jesus and for all those that deserved a win this year. Rather than removing the sweater, he spent the night tearing away at his skin until he had unwrapped himself like a present.

His friends and family were horrified by the incident, but his grandmother could not have been prouder.

Like many of us, Gregory Lawrence was passionate about honoring the birth of our Lord in the form of decorating in his home. He purchased some of the finest nativity figurines that target had to offer. He even included real bits of hay that he reused from his surprisingly racist scarecrow costume. However, as good as he could get the display, it would never be truly authentic without one, dare I say, “crucial” piece: a real human baby.

Tortured by this thought for the entirety of the holiday season, Gregory knew he had to take action. Late one night, while the neighbors were asleep, he crept into their house, just like jolly old Saint Nick, himself. Except, unlike Santa Claus, he wasn’t giving presents to children, but, rather, taking a newborn baby from its parents. Tragically, however, just as Gregory was reaching into the crib, he was met by a very unfestive bullet, fired by the baby’s father. I thought these anti-Christmas types were anti-gun! What a hypocrite!

The Man Who Tried Making Christmas Snakes A Thing

When you think of Christmas animals, what do you imagine? Perhaps you envision reindeer running through the sky, or penguins sliding across their bellies in the Arctic. These are all icons of the Winter holiday, but what if we went beyond that?

Frank Hopkins of Arizona sought to do just that because he was a hero who dared innovate the stale traditions of Christmas.

As Christmas neared his small town, Frank began driving from pet store to pet store, buying up every single snake he could get his hands on. Once he had enough serpents in the back of his Honda Civic, he drove to the hardware store and purchased buckets of red and green paint. With the pieces aligned, he went about his plan and began dipping his snakes into the paint so that they could become living embodiments of joy and kindness.

Frank was a Christmas-loving American, not an animal expert. If he was the latter he might have known that snakes hate to be dipped into buckets of paint. These beautiful beasts, unaware of the concept of Christmas, decided to bite Frank and the venom flowed through his veins and into his jolly heart. A coroner pronounced him dead Christmas morning and declared him a savior the moment we heard the story.