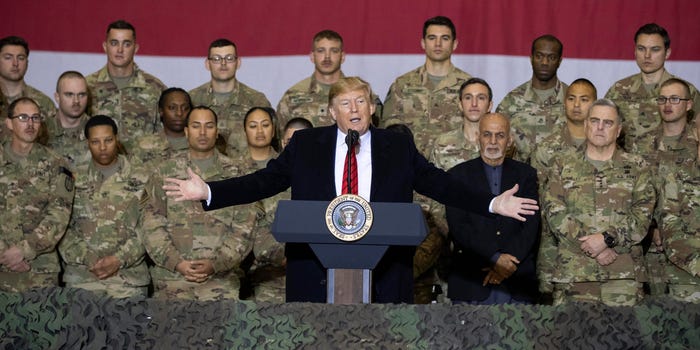 OPINION: When Trump Said We Were Leaving Afghanistan, He Didn’t Mean It LITERALLY!

“President” Joe Biden has just made the most irresponsible foreign policy decision of his entire career; he got US troops out of Afghanistan. Now, I was totally for this like 8 months ago, but now that it’s happened, I can’t be more opposed to the idea. And of course, right on cue, the leftist mob on Twitter has been trying to “correct me” by saying that we are leaving 3 months late, and that actually Trump negotiated with the Taliban to have us out of Afghanistan by May of this year.

Now, on its face, there’s a lot to back that claim up, but they don’t get the subtlety of how Trump negotiates. You see, by promising to “leave Afghanistan,” he was merely using the age-old Washington-insider expression that we all know ACTUALLY means “to be fiercely hawkish and never surrender Afghanistan to terrorists.” But if you have a BA in Gender Studies and can’t tell Trump supporters storming the capital from Antifa dressed up in costumes, you could become easily confused and assume that Trump meant we were actually going to leave. This is just another example of the mainstream media taking a quote from Trump out of context and twisting his words.

I know what you’re gonna say, “but what about the literal deal he SIGNED with the taliban? Surely that could not have been taken out of context!” Well, if you’re an idiot and think that “signing a deal” means you’re bound to your word, then I guess so. But if you’re smart, like Trump is, and I am, you know that signing a deal to remove all US forces from Afghanistan is more like a strongly-worded maybe-gonna-go-through-with-it probably-not-gonna-do-it sort of agreement.

To provide some perspective, our brave leader Trump has a history of promising to do things that he didn’t end up doing; why would this promise be any different? I mean we don’t have a concrete border wall, and last I checked Hillary isn’t in prison (unless you consider living in Westchester prison, which I do), so it’s not inconsistent of him to be inconsistent. So to all the people out there who think that this gotcha-Journalism is making republicans look stupid and like we have doubles-standards, the truth is, this couldn’t be more representative of how we approach foreign policy in the Middle East and how we make promises to the American people in general. Get a grip guys, this isn’t Trump’s fault, he crossed his fingers when he made the promise so it doesn’t count.