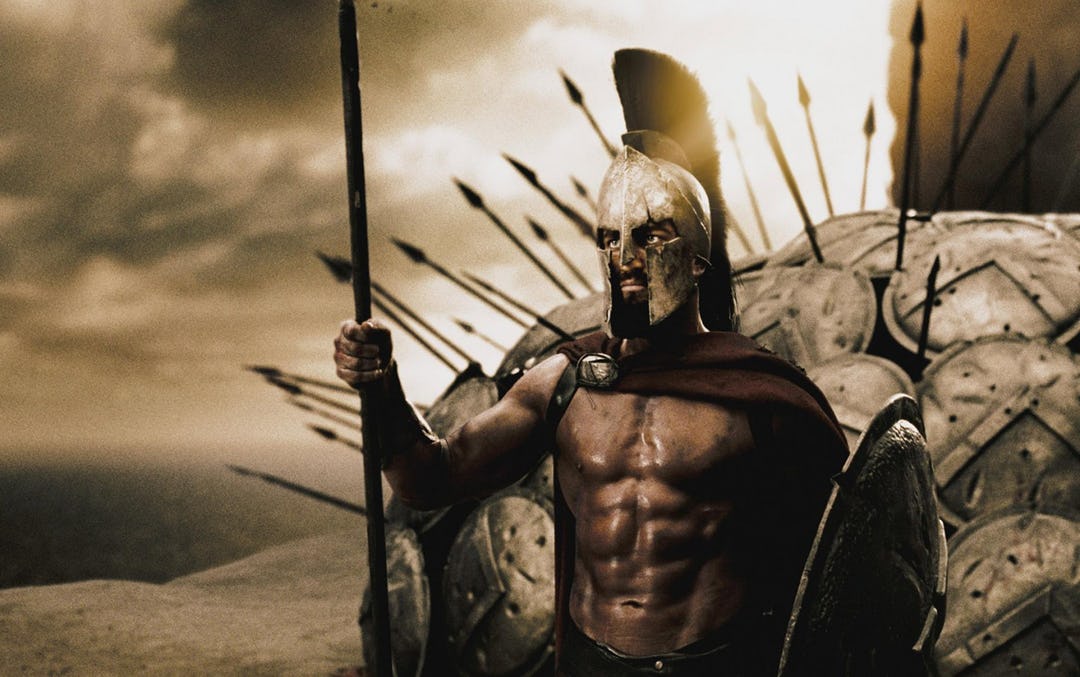 The Spartan Mindset: A Mental Guide to Prepare for Your Walmart Greeting Shift

At one point in history, the Spartans were an army of men that embodied masculinity in its peak form. Ferocious, dominant, and built-in a singular mentality, Spartans were able to conquer their enemies and take control of their lives. And that’s kind of similar to what I do when I prepare for my Walmart greeting shift.

Every morning I wake up and prepare for my shift at the crack of dawn. 4 AM, I go for a run. 5 AM, I watch the movie 300. 7 AM I eat breakfast which consists of ancient grains, and Spartan meat staples like pigs, goats, and sheep (or a pop tart sometimes when I can’t afford meat).

This ritual is just one way that I try to live my life like a Spartan. Because let’s face it, the modern world is emasculating men. Ever hear the quote “Don’t pray for easy lives, instead pray to be stronger men?” This famous quote, that JFK didn’t say, encapsulates exactly how I want to live my life. If you want to live like a Spartan, here are a few tips to achieve ultimate perfection.

When I walk into work, I immediately launch into my pre-battle ritual. “Howya doing, champ?”, a coworker might say to me. I usually don’t respond, because I’m busy chanting and performing vocal warm-ups. It may seem silly, but you have to power through. “Yes, John, I have to do this in the break room, Rob is in the bathroom again.”

You have to remember that when you practice the Spartan Mindset, Walmart is not a chain store. It’s a battlefield, and every stupid, simpering customer I have to greet is your enemy. My vocal chants are a way for me to prepare my body and my mind to achieve my True North by dominating every single interaction that gets thrown at me, so please shut the FUCK UP John, and let me do my job, you sniveling little shit.

When you’re sitting in that human resources office and the HR person is going on and on about how you can’t keep yelling at John, it’s vital that you don’t break eye contact. That subliminally sends the message that you won’t back down. You’re like a Spartan, and when the going gets tough for a Spartan, they double down.

I try my best not to blink when the HR person says, “Please, we’re just trying to do our jobs. We work at Walmart. You think I wanna be doing this? I have a master’s in psychology.”

I respond, “I’m exactly where I want to be. It’s like they say, ‘hard times make hard men. Hard men make soft times. Soft times make soft men.’” For effect, I take out an apple, rub it on the desk, and then throw it in the trash. The HR guy breaks eye contact. Vital mistake. I get up and leave. “Alright, I guess we’ll talk about this…later.” I don’t look back, and I don’t respond. Spartans didn’t have a Human Resources office. Why should I?

Remain Alert on the Battlefield

You need to operate under the assumption that every person you greet is hostile. When you greet someone at Walmart, you need to conquer them. Stare them down with an intensity that says, “welcome to Walmart, and also do not FUCK with me.”

If someone steps to you weirdly, match their energy. If someone mocks you, don’t be afraid to retaliate, no matter what those training videos they showed you said. Don’t let anyone throw you off your game. My position as a greeter was forged from discipline, training, and practice, and I’m not going to let some punk kid get away with making fun of my uniform.

When the Time Comes, Attack

So I didn’t realize the kid was 12. I swear he looked at least 17. He’s a fucking big dude, and frankly, I’m not fully convinced he’s not just pulling our chain with a fake ID. Yes, the regional manager also pointed out that it doesn’t seem likely a 17-year-old would make a fake ID that’s younger than his age. But 12 or 17, that’s not going to change the fact that conquer or die is at the core of every Spartan.

In Spartan times, they used to throw kids that were weak off the mountain. My boss tells me that will not hold up in court. In Spartan times, they didn’t even HAVE court, they would settle their differences through militant action and kicking people down pits. But as it turns out, kicking isn’t my strong suit, and my boss was able to grab my leg almost immediately.

Look, just because I’m decided to submit to the police quietly doesn’t mean I’ve lost the spartan mindset. Anyone who knows Spartan history knows that they were an authoritarian society that required their men to follow a strict set of rules in order to achieve greatness. Police help keep the fabric of our society together, and plus they have guns, so I’m going to do what they say for now.